I recently was gifted on my kindle the book A Nighttime of Forever by Matthew S. Cox. It is the first book in the Vampire Innocent Series. It is a humorous novel following the teenage antics of young woman recently turned into a creature of the night … 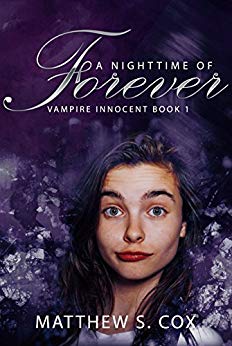 A Nighttime of Forever was by a well-crafted novel that was light, humorous, and quickly read. The book’s main character is a young and naive girl named Sarah. She is murdered by her high school boyfriend and found nearly dead by a vampire. In a moment of sympathy for a young girl, who is very much still a child despite almost being through with high school, he saves her life by turning her into a vampire.

Sarah wakes up literally in the morgue unable to remember what had happened throughout the night that led her to being in a body bag. The funny satire in throughout these moments is hysterical. I found myself quite enjoying the comedy of it all.

The book is light hearted despite some heavy topics it covers and this fits the character of the story perfectly. Cox really gave the teenager Sarah a voice and it is displayed throughout the novel in quite an elegant way!

Sarah Wright woke up a few times after parties in strange places―but the morgue’s a first. At eighteen, she’s eager for a taste of independence, moving out of state to attend college. A change of scenery is extra-needed due to a bad breakup with her boyfriend, Scott. However, soon after escaping the body cooler, she makes two startling realizations: vampires are real, and she is one.

There’s nothing quite like an untimely death to ruin plans. California’s sunny beaches aren’t the best place for vampires to chill, and worse, not only does she wind up stuck in Seattle, she’s still living (figuratively) with her parents.

They take the news surprisingly well―after all, it’s better than burying her―even helping move her bedroom to the basement. A disinterested sire, distraught friends, nosy Men in Black, and awestruck younger siblings complicate her adjustment to the new normal of being an immortal still subject to her parents’ rules.

Undeath has its perks, but it also brings enemies. Without a copy of ‘Fangs for Dummies,’ Sarah’s left scrambling for answers when one such new enemy attacks her siblings and friends. If she can’t figure out how to vampire, her attempt to spare her family the grief of losing her may wind up killing them.

3 thoughts on “Book Review | A Nighttime of Forever by Matthew S. Cox – Book One Of Series”